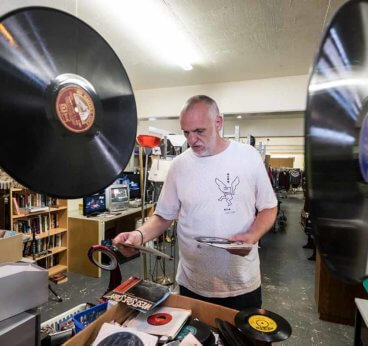 “Furniture Mine was small but a success from the beginning."

In the first of a series of special reports to celebrate Furniture Mine‘s 30th Anniversary, we spoke to Rikki Twigg, who was there right at the beginning: the first Chair of the group which started it all…

“30 years ago, I was the minister at Moorland Road United Reformed Church in Burslem. That’s how I first got involved.

There was a group of us. We got together to look at what could be done, because local housing authorities were finding that quite often they were able to offer people who needed a home, a tenancy but they couldn’t move in because they’d got no furniture. Social services and probation services had got clients who wanted to move into accommodation but couldn’t do it because they couldn’t afford furniture. It was a big problem.  We decided we needed a place locally to store unwanted donated furniture so that people who needed it most, could access it.

‘Furniture Mine’ – a name with local roots

It’s a funny thing – the name Furniture Mine came about during one of our early meetings. At the time, Chatterley Whitfield Colliery closed and there were a lot of buildings on that site that they were letting out. We went to look at them. I remember doodling on my pad during a meeting, and I came up with the logo for the name that we used for years, for North Staffordshire Furniture Mine. Even though we didn’t end up using a building at the colliery, we kept the name and logo (original logo pictured above).

We became officers of the newly-formed company, and eventually secured a building on Lingard Street in Burslem. And that was how it all began. I was Chair of North Staffordshire Furniture Mine for the first four years. We had three paid members of staff – a general manager, an administrator and a driver.

We approached the Salvation Army for volunteers to help with collecting and delivering furniture. We wanted to offer volunteering but not just for the sake of it. We wanted it to be a work training course for them, to give them skills and experience and to encourage them on their next steps. So we set up a training scheme for the volunteers – all of whom had experienced homelessness in the past. We created roles for them; one man was with us for quite a while and ended up with a lot of responsibility; he became the manager in the store. We gave them good references and all this helped them move on to a paid job in future.

Furniture Mine was small but a success from the beginning. We set up a referral system, with a form for local housing associations and other organisations to complete, to assess the needs of the person who was in need of furniture. We had different referral criteria to help us prioritise people who had experienced an emergency (such as a fire or flood) and those who’d been allocated a property but couldn’t move in because they couldn’t get any furniture.

The people being helped then received the furniture from our store, free of charge. In the first three years we helped 2,153 households.

We had financial support from many different local organisations, with funding from places like local councils, local housing associations and local charities – many committed to giving us an annual donation.

I have very fond memories of my time with Furniture Mine and it’s good to hear it is still going strong.”

Now called ‘Emmaus Furniture Mine’,  the enterprise has grown to become the largest furniture and household charity shop in North Staffordshire with over 17,000 sqft shop and warehouse over two floors, located on the southern edge of Stoke-on-Trent city centre.

Whilst many local charities have shops with furniture, no other operates a ‘referrals’ system as we continue to do. As well as serving customers on our shop floor as normal, we partner with housing associations, providing quality affordable furniture to those with no ability to pay, at no cost to the tenants aside from a small delivery fee. Over 30 years, Furniture Mine has helped an incredible 60,000 local people, with over 480,000 items provided to those who needed it most. A massive 20,000 tonnes of furniture & household goods have been reused instead of going to landfill.

Find out more about Emmaus Furniture Mine