The history of Emmaus started in France shortly after the Second World War, when homelessness was a big issue.

The history of Emmaus began in Paris in 1949 when the first Emmaus community was founded by Father Henri-Antoine Grouès, better known as Abbé Pierre. He was an MP, Catholic priest and former member of the French Resistance who fought to provide homes for those who lived on the streets of Paris.

One night, a man called Georges was brought to Abbé Pierre after a failed suicide attempt. Georges had been released after 20 years in prison, only to find his family unable to cope with his return home, leaving him with nowhere to go.

He turned to the Abbé for help, but instead Abbé Pierre asked Georges to help him, building houses for the homeless mothers who came looking for his support.

Georges became the first Emmaus companion, living with Abbé Pierre and helping him to build temporary homes for those in need, first in the priest’s own garden, then wherever land could be bought or scrounged. He later said:

“Whatever else he might have given me – money, home, somewhere to work – I’d have still tried to kill myself again. What I was missing, and what he offered, was something to live for.”

In 1951, Abbé Pierre resigned as an MP to devote himself to fighting homelessness and poverty. Until then, he had used his salary to pay Georges and the other 18 men who had joined them to set up the first ever Emmaus community, but leaving his job meant that no money was coming in. Instead, he toured the smart restaurants of Paris asking for donations.

When the companions found out about this they were outraged, feeling that begging would compromise their self-respect. So, to raise money, they became “rag pickers”, collecting things that people no longer wanted and selling them on. This was the start of the first Emmaus social enterprise. 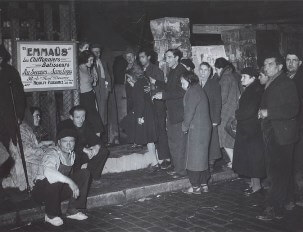 One January day in 1954, Abbé Pierre learned that the baby of a homeless couple had frozen to death in the night. A baby’s funeral sparked the uprising of kindness. Some days later he heard that a woman had died of hypothermia on the streets having been evicted from her home. Angered by these needless deaths, he sent an open letter to newspapers and made a famous radio appeal to the nation:

“My friends, come help… A woman froze to death tonight at 3:00am, on the pavement of Sebastopol Boulevard, clutching the eviction notice which the day before had made her homeless… Each night, more than two thousand endure the cold, without food, without bread, more than one almost naked. To face this horror, emergency lodgings are not enough…

…Everyone can help those who are homeless. We need, tonight, and at the latest tomorrow, five thousand blankets, three hundred big American tents, and two hundred catalytic stoves…. Thanks to you, no man, no child, will sleep on the asphalt or on the waterfronts of Paris tonight.”

The French public responded – gifts and support flooded in.

Emmaus communities opened across France. Abbé Pierre became an international figure and travelled the world spreading the word about Emmaus, leading to new communities being set up on four continents.

Abbé Pierre continued to campaign until his death, in January 2007, aged 94. His funeral on 26 January 2007, at the Cathedral of Notre Dame de Paris, was attended by numerous distinguished guests, but according to his wishes, it was Emmaus companions who sat at the front of the congregation.

Your support will make a difference to people's lives

Apply for a place in one of our communities

The History of Emmaus in the UK

Emmaus had been established in France for 40 years before it came to the UK in the early 1990s, all thanks to a chance encounter at a Cambridge soup kitchen.