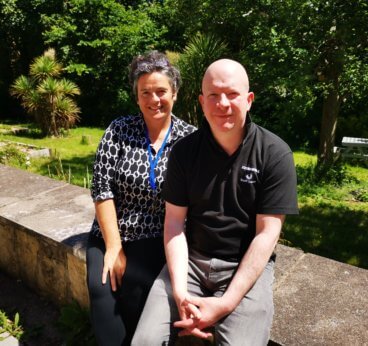 I have been a trustee at Emmaus South Wales since November 2017 and Chair of the Board since April 2019.

In October 2017, I met the former Chief Executive of Emmaus South Wales at a networking event. We had a chat and he explained how Emmaus helps people who have experienced homelessness or social exclusion to get back on their feet and we talked about the role trustees have in supporting the charity.

A year prior to this, I had begun to reduce my workload and had a little more time for myself. I had never been a trustee before, but the thought had crossed my mind with so many great charities out there. None had really jumped out at me, until I heard about Emmaus.

The chat with the former Chief Executive reminded me of a situation I had found myself in 12 years before. I was a Finance Director for a law firm with a good salary and my own home. When I decided to set up my own accountancy business, I didn’t really have any savings and left my job without any clients. I gave myself a year, recognising that I’d probably have quite a lot of debt, and if it didn’t work out, then I’d have to go back to work and pay it off.

He was in hospital for eight weeks, broke his back and his feet, and couldn’t stand for three months. Mentally, the recovery from that kind of accident was difficult, and I tried to shield him financially because he had lost all his income which meant his bills weren’t getting paid.

Suddenly, I was in situation where I had very little money coming in, maybe a couple of hundred pounds a month, and two houses to pay for. My husband and I talk about this time often and neither of us really know how we managed to get through without losing everything. If just one thing had been different, like the mortgage company or our creditors saying no to new terms, then the whole situation would have folded on us.

That’s why Emmaus really resonated with me as a charity to become a trustee for. It has always been on my mind that losing everything can happen to anyone. When we are in bad situations, it’s so easy for it to spiral into something worse, whether it started with a relationship breakdown, losing a job, or anything else.

If someone becomes homeless, they need a sense of security because how is anyone supposed to piece their life back together when they don’t even know if they’ll have a bed the next week? Emmaus gives people that security and the opportunity to rebuild their life and that’s what really appealed to me.

Coming in as a new trustee can be quite a daunting thing. I didn’t say a lot in the beginning, and instead sat in meetings and watched and listened. Gradually I started to speak up, and a lot of difficult decisions had to be made because I joined Emmaus South Wales at a time when it was not in the best shape.

Eventually, I became joint Chair which gave me the confidence two months later to step up as Chair of the Board. The past few years has been an incredible amount of work, but I quickly became emotionally invested and could never walk away from the companions or the rest of Emmaus.

Becoming a trustee is a balance between what someone wants to get out of the role and what the charity actually needs. When I joined Emmaus, I had envisaged myself helping in the shops and working directly with the companions, which of course is always an option if time permits. Instead, however, I found all my time was taken up doing the finances and dealing with difficult situations within the community – because that is what Emmaus needed at that moment.

In July 2019 our new Chief Executive Jemma joined and has been amazing at driving the organisation forward. I have now been able to take a step back from the day-to-day issues and really focus on building a strong Board of Trustees, including recruiting three new trustees and a new treasurer.  We now have a Board with the skills and experience we previously lacked. As Chair, I’m pleased with the progress we have made. Over the past couple of months, due to COVID-19 we have been holding virtual board meetings and set up a WhatsApp group to give us an instant way to communicate and make quick decisions.

A memorable highlight as a trustee was our Christmas meeting in 2019 with companions, staff, volunteers and trustees. We had a strategy type morning and the feedback was fantastic. Everyone felt like they were part of something and really stepped up to think about how they could contribute to Emmaus, which is what community living is all about. Afterwards, all 40 of us went bowling and had loads of fun – that was a massive high point for me and a realisation that we had the basis of a good Emmaus community.

The skills and experience that people bring to any Board of Trustees are so important to a charity. Sometimes it might feel like the rest of the organisation doesn’t see or know what you’re doing, which can feel frustrating. However, as a Board we can now see a future where we will be able to help not only those we currently support, but also drive the Emmaus South Wales vision further, enabling us to grow as a charity and support many more companions and volunteers across Wales.