Emmaus Salford supports people to work their way out of homelessness. Learn more about our charity, community and social enterprise.

Emmaus Salford's success relies on the continued support of individuals and organisations. Find out how you can make a difference today.

Emmaus Salford delivers a range of services that support our charity and the wider Salford community. Learn more today.

"Coming to Emmaus is one of the best decisions I’ve ever made."

Some bad decisions and a few unfortunate situations led me to becoming homeless but I’ve definitely learned from the experience.

I moved out of my mum and dad’s when I had just turned 18. For a couple of years I lived with my mate but he then decided to go to university. After that, I found myself homeless. I ended up in a hostel but I was the oldest one in there so had to move out soon after. From there I got a flat in a communal house and it was the worst place ever.

When I became homeless it hit home what homelessness really is. I was embarrassed to tell anyone and came up with excuses why I couldn’t meet up with my mates. What I didn’t want was for people to judge my decisions and the situations I’d been in. I’ve always got the support of my family but they’ve got their own problems so I never wanted to add to their problems with mine. I never really wanted to ask for help.

After about a year homeless in hostels I spoke to my sister and she could see I wasn’t going to survive another year if I stayed in that flat. I packed two bags and stayed with my sister for a couple of months until I found somewhere else.

Whilst searching I went to Emmaus Bolton but they didn’t have rooms. The staff member there took me to the council to try and get support but they said it’d be at least three months before I could get in somewhere. I was desperate so rang my nan and she put me up on her floor. I had a couple of jobs but it wasn’t really working at my nan’s, so I made myself homeless again.

For about three months I was homeless again but remembered about Emmaus. I walked from Bolton to Emmaus Salford and was met by a smile from a companion as soon as I walked in. The support worker helped me fill out the application and thankfully I moved in soon after.

I joined Emmaus Salford in March 2020, a few weeks before the first national lockdown. I was just getting used to how Emmaus works and then, all of sudden, lockdown! Moving to Emmaus was better than I expected to be honest. As a new person going into a building where people have been together for some time, I wondered if I’d fit in OK. Straight away I was accepted, and it was just really good to meet some new people. I met some people who wanted the best for me, wanted the best for themselves and the best for Emmaus.

The first day at work I was tasked with doing gardening. I soon realised I had hay fever so that went straight out of the window. Then I was put on the vans and it was just remarkable. I met some characters picking up furniture and got to have a chat with them. It was nice to see people smiling and having conversations, and I really enjoyed it. And then lockdown came.

After the shops temporarily closed I volunteered to get involved with Lucie’s Pantry. It was something I’d never done before and I enjoyed every moment of it. In the pantry I could talk to customers, at a distance, and got a feel for what they were going through. I ended up running the pantry for about four or five months.

We had a woman who really needed the pantry. Despite going through a hard time, she always smiled and said thank you whenever she visited. She made it clear that families were relying on what we were doing and thankful that we’d kept the pantry open during lockdown. It was just the whole gratitude of her which was nice to see and that she appreciated our support during the hard times when people weren’t allowed to work and go out. It felt warm talking to her. 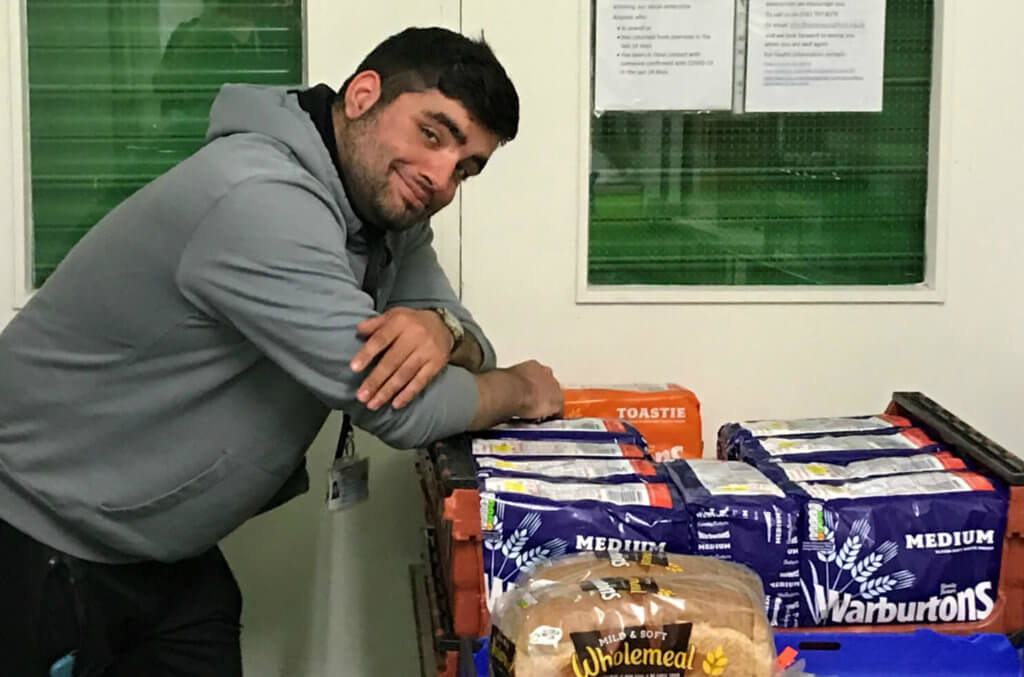 Before I came to Emmaus I was already trained in emergency first aid, response and working with disabled people. Whilst here I’ve refreshed those courses which I didn’t know I could do. I’ve also done health and safety, manual handling and food hygiene training. In lockdown, in the space of two days I did a lot of online courses and have now got 46 certificates.

Thanks to the Emmaus Companion Training Fund I’ve also been able to restart my driving lessons. I started driving lessons before I came to Emmaus when I was about 19. It was not a good experience back then so I stopped learning. This time my instructor is one of the best people and believes in me. He stayed in touch throughout the lockdowns even though we couldn’t have lessons. I’m now back on it and hope to get my test booked soon.

Whilst at Emmaus I got involved with the Foundation 92 sessions after the first lockdown eased. Being stuck in together for three or four months we were all ready to get outside, do something physical and have some fun. It was good to see other people too and I started going every week.

After taking part in the football sessions and really enjoying it, there was a volunteering slot that came up with Foundation 92. I was a bit nervous to ask for it because I didn’t want to get rejected. When you’ve been rejected loads obviously sometimes you get used to it. I had to pick up the courage because I had lost a lot of confidence and was questioning myself. The staff at Emmaus gave me the push I needed.

I asked in the November and started volunteering the week after. I did two days a week, doing football coaching, handing out food parcels and helping in any way I could. It was a real eye-opener in terms of what I wanted to do in future.

Following the volunteering, there was an opportunity to do the Kickstart scheme with Foundation 92. I did it alongside working at Emmaus, fitting in all the work and proving myself to the staff and coaches. Whilst on the scheme I was offered a job as Assistant Coach at Foundation 92 with progression to move up. It was more than I was expecting and when they offered me the job I couldn’t believe it. I’ll be starting with them just after I finish the Kickstart scheme and cannot wait.

When Damian first took part in our 92 Shield session as an @Emmaus_Salford companion, he was unemployed.

12 months later, he's graduated from our Traineeship Programme, begun a full-time role at Foundation 92 and now leads the 92 Shield!

My message to others

In the short term, Emmaus has saved my life. It sounds weird because I had a load of people around me but before coming here, I felt alone. Now I talk more than I used to and have enjoyed the interaction with other people.

I never thought I’d be homeless but stuff happens. Honestly, I wouldn’t change what I’ve been through because I wouldn’t be who I am today. I wouldn’t have met my true self and proved how strong I am. Coming to Emmaus is one of the best decisions I’ve ever made. In the past year I’ve met some great people, but I’ve also met myself. You learn about yourself and how to deal with certain situations. It’s just been one big achievement here.

My advice to anyone going through difficult situations is speak to people. No matter how big or small the issue is, speak to people. If you do chat to someone else about it, there are two of you tackling that challenge. Even if it’s a good challenge, speak to someone because you can achieve more when there’s a team.

Look in the mirror and thank yourself for getting up in the morning and believe in yourself. Always go into a situation like you’ve won the best prize of your life. My last bit of advice is always plan, but be prepared to make changes. Change unfortunately happens so be prepared as best you can for whatever life throws at you. 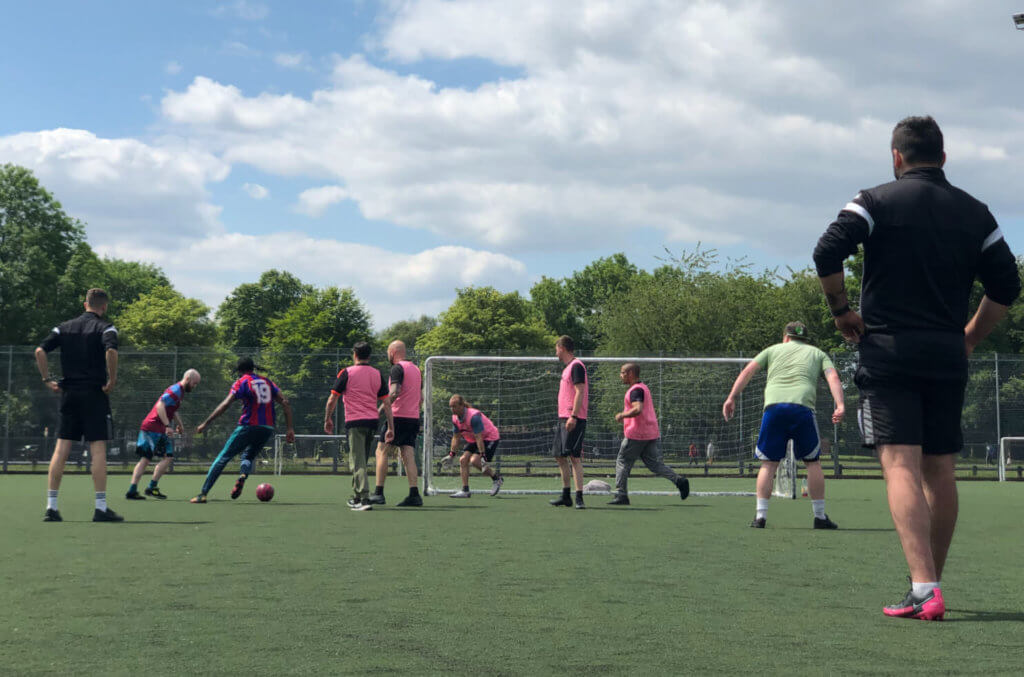