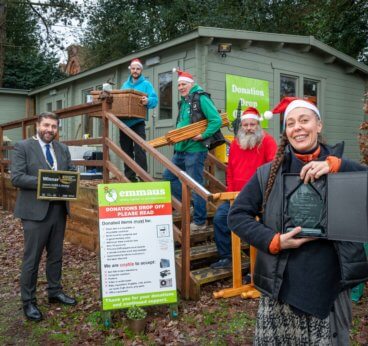 "I like getting up in the morning at Emmaus because I have a purpose and it is my home, which is a great feeling."

Life was bad before Emmaus. A combination of events led to me living on the streets for two years and having a breakdown which got me sectioned.

Before becoming homeless, I was living in Hertfordshire with my partner and her two children, who I loved like they were my own. I am a qualified chef and set up and ran three busy restaurants in Hertfordshire – everything was going well.

After 12 years of being with my partner, life changed. I discovered that my partner had been having an affair. It was a small village, I knew the man, and I was devastated. I felt as though I had given her everything and it was all gone. For the children’s sake, because I didn’t want them to see us fighting, I left our home and moved into a flat with a friend. She wouldn’t let me see my step-kids, so I ended up losing them too.

I tried to rebuild my life after that and I eventually met someone else and moved from Hertfordshire to London with her. I was with her for more than two years before I found out that she was also seeing someone else who she had met at the pub she worked in. I ended that relationship and moved into my mum’s flat in London as she was moving back to Ireland because she was unwell. While there, a few days after ending the relationship, I stopped by the pub that my former partner and the man she was seeing worked at. I had a massive argument with them, which ended badly.

Life really started to take its toll on me then and a week after the argument I had a psychotic break – I thought people were after me. I began to hear voices and saw things that weren’t there. Everything that had happened seemed unmanageable and I jumped into the River Thames. I was in the water for about 20 minutes before the fire brigade pulled me out. I still remember it well – when they pulled me out of the water I felt stupid. I didn’t want to die.

I was in hospital for a couple of days before getting sectioned. When I got out, I had lost my mum’s flat because it wasn’t in my name and so I was put into temporary accommodation. It was only after I was released that my older sister, who was in Ireland looking after my mum, told me that my mum had died while I was sectioned. Not being in a very good mental state, I didn’t know how to cope. I didn’t have a passport to go over to Ireland, had no money to get there, and the thought that I couldn’t say goodbye was heart-breaking. With nowhere and no one to turn to, I took to the streets.

Those events led to me sleeping rough on-and-off for over two years, although I got sectioned twice during that time and put into temporary accommodation. A typical day on the street became finding a centre to get a meal, shower and clean my clothes but there came a point when it was hard to get motivated. I had lost everything and didn’t see the point – life just kept getting lower and lower.

Being sectioned twice didn’t help either. It felt like I was just a number waiting to be discharged while getting piled with medication. When I was released, I would have nowhere to go so they would put me in temporary accommodation and I would always end up in the same position again without anything.

While on the street, my younger sister was trying to find me and had reported me missing. When I was found on the street and taken to Lambeth Assessment Centre I was told that my mum hadn’t died, but that my older sister had lied for some reason. Although it was awful what my sister, who I no longer speak to, had done, I felt as though a weight had been lifted. Through Lambeth Assessment Centre, I met someone from Emmaus Lambeth who told me to visit the community and that’s how I found Emmaus.

I lived at Emmaus Lambeth for seven months and they gave me the chance to put myself back together again. I think the only person that can sort your problems out is yourself, but I just needed the opportunity to do so and Emmaus gave me that. I moved to the Emmaus community in Norfolk & Waveney after coming to visit for the week. I liked it here immediately – it’s a lovely place and very tranquil. The first day I arrived, the staff here said “Eamon, here’s the kitchen” and left me to it.

I’m now in the kitchen every day doing what I love – cooking for the community. To me, it isn’t a job. I’m left alone for most of the day to cook, which doesn’t bother me as it is something I enjoy and if I can give back to the community by giving them really good food then that’s all that matters. I’m hoping to eventually train other people on cooking properly – if they are going to move on from Emmaus then they need to know how to cook a meal or two.

Emmaus also helped me get all my certificates back again such as my health and hygiene and I have joined a Judo club in the local area which I go to weekly. There’s also a lot going on in the community like plans for a new restaurant and staff here are keen for companions to get involved as much as possible.

I still have issues, but at the end of the day, I’m a trained chef doing what I love in a place that has made me feel happy and settled. I like getting up in the morning at Emmaus because I have a purpose and it is my home, which is a great feeling.

The recent lockdown and coronavirus situation hasn’t impacted what I do too much within Emmaus – I am still cooking for my fellow companions and enjoying it. Being together as a community and surrounded by supportive people has really helped during this time. We all know that someone will always be there to chat whenever it feels like too much. To stay busy while I’m not cooking, I have been reading, going for walks and baking. We have received a lot of food donations from the public too so I have been putting that to good use in the kitchen. After lockdown eases, I’m most looking forward to having that sense of freedom again and hope everyone is staying strong and keeping safe for now.