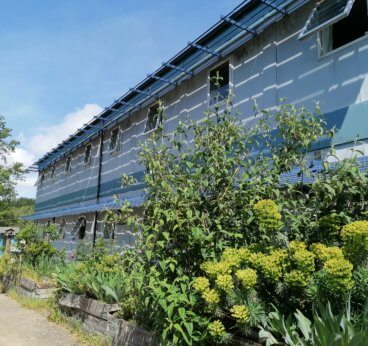 “Emmaus is making me realise what I want out of life and is helping me to achieve my dreams.”

I grew up in a little place on the Isle of Man and my parents divorced when I was really young.

I moved to London at 16 and went to catering college, then I started doing contract work as a chef, barman and waiter. It led to a job at Newbury Racecourse, where I worked Ascot and other big events through the late nineties. But while I was there, I developed a drug habit, alcohol addiction and gambling problem.

In 1999, I took a job doing farm work in Preston, but quickly lost it. I couldn’t find another job in the city, so I walked 30 miles from Preston to Liverpool to see if I could find something there. I had no luck. It was my first experience of homelessness. I was homeless in Liverpool for about four weeks, before I found support at a soup kitchen and met someone from a local charity who helped me find temporary accommodation.

I stayed in Liverpool for about four years, went to college, became a student journalist, then in 2004 I moved to Cornwall. But I couldn’t find work, so I wasn’t there for long before I moved to London, where I was homeless once again. I used to sleep by a church on Liverpool Street. Just me and a small bag with all my worldly possessions in. I got to know where to go for a hot meal, shoes and a sleeping bag, but I didn’t like being hemmed in in a busy city. I never knew how many people were homeless in London until I saw 400 people queuing up for a food drop one day.

A few weeks later, someone walked past me and asked if I was alright. I said: “Do you really want to know?” and he did, so I told him everything. “Come with me” he said, then took me down to the nearest Crisis centre. They put me in touch with the homelessness charity St Mungo’s who were able to get me into a hostel. Not long after that, I started volunteering for Crisis. I did all sorts there; data entry, marketing campaigns and Crisis at Christmas – I’ve done 16 of those now.

My gambling was still going on, but at that point I realised it was getting out of hand. I never usually drank when I gambled, but one night I went out drinking and woke up the next morning £1,800 overdrawn. I just kept putting down my debit card and spending more and more money at the casino. Up until then I didn’t see it as a problem, but in that moment I decided to cut up all my casino membership cards and haven’t gambled since. It was a few more years before I was able to get over my drug and alcohol addiction.

Eventually, I managed to get a flat in London, but no one told me how to reapply for housing benefit, so after two years I was evicted. I went back to Cornwall again and did a few catering jobs there. Life was ok. I met some great people and learnt how to surf, but as soon the season ended my work dried up. I thought, I can’t be homeless in Cornwall over the winter, so I moved back to London and slept on the streets by the Royal Opera House.

Eight weeks later, I moved into Emmaus Lambeth. I was in the St Mungo’s offices one day when I saw a leaflet about Emmaus on the desk. I had a look at it, gave them a call, then they rang me back to say they had a room for me. I stayed there for two and a half years, but had to leave as I kept testing positive for marijuana, which was against their rules.

I moved up to Northamptonshire for a while and worked at a wholefoods warehouse, which I did for three years before they went out of business. I then became a bin man, but it was a very active and intensive job and I ended up blowing my knee out. I couldn’t work for four weeks and when I came back, the job wasn’t there anymore.

My mate said he had some work for me in Cornwall, so I packed up my stuff and was on my way there when he told me the job had already gone. I had nowhere to go and nowhere to stay, so I booked myself into a hostel. A week later, I moved into Emmaus Surrey, but didn’t feel settled there, so I got transferred to Emmaus Hastings & Rother where I’ve lived for two years now.

I love it here. Our Deputy Community Leader Sallie is amazing, I can’t say enough good things about her. She is always there to listen, she’s great at advice, and if you need something she will do whatever she can to support you.

My job in the community is to sort through donations. I’m also working e-waste into our social enterprises, so instead of throwing unusable electrical things away, I strip the stuff out, recycle the plastic or metal, then sell the circuit board. It’s another way to reduce waste and helps the charity make a bit more money.

I enjoy working with my fellow companions (formerly homeless people now supported by Emmaus), and find it helpful talking to people who have been through similar things I have. It’s a good vibe; we bounce off each other. I’ve learnt a lot from them.

Being at Emmaus really helps me. It’s my home. It’s stability. It’s making me realise what I want out of life and is helping me to achieve my dreams. I hope to open up my own collectables shop one day. I used to work as an antiques runner in London, moving from market to market and doing all the fairs, so I’ve got all that experience behind me. I imagine the shop having a nice café inside, so customers can come in, enjoy a coffee and have a little browse.

From 30 November 2021 face coverings are mandatory in shops. Please make sure you wear a face covering when you visit us.

Please pre-book all your donation drop offs on 01424 755111 option 1. Please note clothing donations are a max of 3 large bags per person and need to be pre-booked for a Tue/Thurs or Saturday drop off.