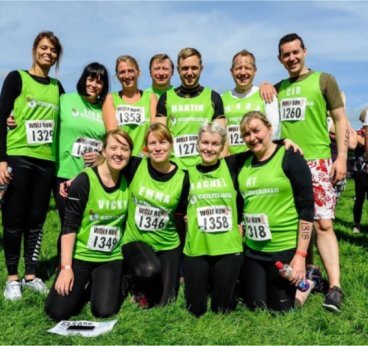 Six brave workers at a Coventry-based event management firm stripped off to receive their first ever spray tan to launch a charity campaign which benefits Emmaus Coventry & Warwickshire.

The spray tan, held at the head offices of event management specialists StadiumTM in Coventry, was one of many events being held this year to raise a minimum of £10,000 which will be split between ten different charities, including Emmaus Coventry & Warwickshire, to celebrate the company’s tenth anniversary.

The six men were all bronzed in turn by Jade Haverty, staffing coordinator at StadiumTM, who has experience in spray tanning. More than £400 was raised on the day for YoungMinds, once of the chosen charities, and a further £100 was later raised at a fundraising quiz. Maria Holmes-Keeling, marketing manager at StadiumTM, is organising the year-long anniversary fundraising campaign and thanked the men for having the courage to volunteer:

“I’ve got to thank all the men who took part for being brave enough to get their kit off and have a spray tan in aid of YoungMinds, the charity chosen by Jade for this fundraising activity. Jade’s idea to perform a charity spray tan was brilliant and she did a fantastic job. They all look they’ve been on the beach for a few weeks. It was such a fun way to launch our campaign to raise £10,000 for ten different charities. I hope our other planned events later in the year are just as successful.”

Further charity events planned for this year include an abseil down Coventry Cathedral, a Three Peaks Challenge and an ‘It’s a Knockout’ style fundraising day.

StadiumTM is a specialist supplier of traffic management, stewarding, security and training services to the events industry, both nationally and internationally. It also supplies temporary Hostile Vehicle Mitigation (HVM) barriers helping protect visitors at events against potential vehicle-ramming attacks.
Although the firm’s head office is in Coventry, it has a number of high-profile clients across the UK from Premier League football clubs to local authorities, so many of its workers are based elsewhere in the country.

Maria came up with the idea to put together a fundraising calendar of events to not only raise money for a number of good causes, but as a way of bringing staff members together:

“When we first launched the campaign, we asked our staff what charities were close to their hearts. They replied with a lovely mix of local and national charities. We’ve got so much going on this year, and every worker at StadiumTM can get involved with any of the activities.

“This campaign is a way of raising money for all sorts of charities, but also to have fun and unite our teams across the UK, working together to give something back to the communities we live in and help those less fortunate than ourselves.”

Anyone wishing to donate should visit StadiumTM’s fundraising page at chuffed.org/project/stadiumtm