Emmaus Colchester supports people to work their way out of homelessness.

Emmaus Colchester provides a home and meaningful work in a social enterprise for as long as someone needs it.

I have been homeless three times since the age of 18

I am originally from Ilford, but I have lived in Colchester since I was 14. Growing up I always had a rocky relationship with my parents and three brothers. My mum fostered and our place was often hectic with eight or more children in the house. I was expected to be the example as the eldest brother, and I felt like I couldn’t always live up to that expectation.

I began feeling “down” and by the age of 15 I was struggling with depression. I would break down in tears without knowing why, and began misbehaving in school. The teachers came down hard on me, and my mum thought it was just teenage angst.

Towards year 10, I was breaking down most days and became suicidal – being suspended from school only made matters worse. The depression and stress at home became too much to handle and my friends began to distance themselves from me.

I began using drugs as a way to deal with the pressures of my family home, everyday life, and suicidal thoughts. At the time, it seemed to help with my depression as a short term fix – it made me forget about all of the negative things in my life. The late nights and drug use began to cause arguments in my family, and my parents kicked me out when I turned 18. I didn’t really have anywhere to go, so I pitched a tent in a field near where I worked and slept there.

At first, the new found freedom felt good, but soon my drug-using escalated. That was my rock bottom. I lost six months of my life to a Class B drug. I lost my job and got into a lot of debt. It was only when I began using as a replacement for sugar in my tea that I realised I had a problem, and I was very lucky to be able to slowly wean myself off.

I began to settle down in my early 20’s when I started my gas qualification and moved into my grandparents’ house, but it wasn’t long before they kicked me out too.

I spent nights sleeping on park benches because I didn’t know anyone in the area, and I got arrested a couple of times because I was sleeping rough.

After that, a friend let me stay on their sofa while I was doing my qualification and I later moved in with my girlfriend.

I was stuck in a cycle where things will be going well, then something would happen that would bring me back down. My Nan and Grandad died within a short time of each other, and at this point I gave up. I didn’t finish my gas qualification and I withdrew from everything. I didn’t see my parents or siblings for the better part of two years during that period, and didn’t leave my girlfriend’s flat for weeks on end. I was just waiting around for nothing, and that went on for over four years. My girlfriend got the brunt of my attitude, and she eventually kicked me out. I spent four weeks sofa-surfing or finding cubby holes on the street to sleep in before coming to Emmaus Colchester in September 2017.

I’m in a better place at Emmaus – I don’t have to live on the streets, live on a sofa, pitch up a tent, or worry about the police or getting mugged. It’s a safe place and everyone looks out for each other. 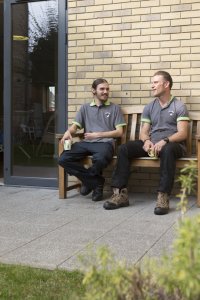 I feel as though I’m making a difference to my life now and with the help of Emmaus and counselling sessions, I have begun to look to the future. I spend most of my time at Emmaus working in the kitchen, cooking for the other companions, and I have finished my Level 2 Health and Hygiene qualification. I have also reconnected with my ex-girlfriend since coming to Emmaus, and we are slowly building our relationship back up. I’m in a much better place now and the relationship is different to how it was before, in a good way.

My aim for now is to be in a happy place for a wedding I have coming up in the summer. I want to be able to say that I am trying to better myself when I see old friends and other people I haven’t seen in a while.

I’m definitely on the mend, but I know it will take time. Before Emmaus, I was frustrated about everything. It felt like I had spent my whole life struggling, I was trying to do the best I could every day of my life, but I didn’t seem to be getting anywhere. I’m now starting to see a landscape in front of me, whereas a few months ago I could see nothing.

As my Grandad used to say, it always starts where you’re standing, not the first step. The first step is always the second in the adventure.

I have been homeless three times since the age of 18