Former companion to take part in Race Against Hunger

On Saturday 2 April, one of our former companions, Spencer, will be joining thousands of Trussell Trust supporters all around the UK to run the Race Against Hunger 5K.

Spencer has previously been a companion here at Emmaus Cambridge and now regularly volunteers with us here at Landbeach. He has experience using foodbanks during times of financial difficulties and wanted to give something back.

He is raising money for Trussell Trust and has already raised the majority of his £50 fundraising target. To support Spencer, visit The Trussell Trust: Race Against Hunger 2022 (enthuse.com). 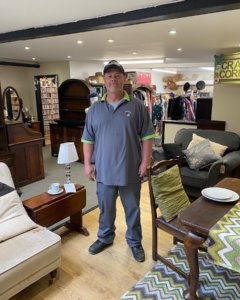 Explaining why he is taking part in this run, Spencer says:

“I understand the hardships that families face when they have no money to buy food.The food banks around Cambridge are truly remarkable. Unfortunately, many more households are seeking help, guidance and food due to a number of reasons such as fuel prices and the cost of living, which has seen a huge rise of households not being able to make ends meet.”

The Trussell Trust supports a nationwide network of more than 1,200 food bank centres, providing emergency food and support to people locked in poverty, as well as working to challenge the structural issues that force people to use food banks.

From this Wednesday, 2nd March, we will be able to accept donations of good-quality items every Wednesday – Sunday, 10am – 1pm.
We’re really grateful to everyone who donates their furniture, clothing, homewares, bric-a-brac and more to us, as this all helps to fund the work we do with the formerly homeless people who now live and work with us here at Emmaus Cambridge.
As it costs us money to dispose of broken or unusable items, we ask that you only drop items to us if they are in working order and aren’t damaged.